What is a Transient Ischemic Attack (TIA)? 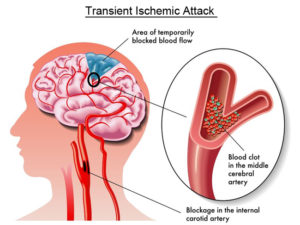 A Transient Ischemic Attack (TIA), also called a ‘mini-stroke’, occurs when the blood supply to the brain is disrupted. Unlike a full-blown stroke, the symptoms of a TIA, which are very similar to a full stroke, last under 24 hours and afterwards there is full recovery.

A TIA is an indication that part of the brain is not getting enough blood and that there is a risk of a full stroke occurring.

What are the symptoms of a TIA / mini stroke?

The signs and symptoms of a TIA are the same as a full stroke. This may include:

A TIA should never be ignored and should be reported to a medical professional as soon as possible. According to The Stroke Association, without treatment a quarter of people having a TIA will go on to have a full-blown stroke within a few years and up to 12 per cent of those who develop a TIA will go on to sustain a stroke within the following 12 months. The highest likelihood of suffering a stroke after a TIA is within the first four to six weeks.

Medication such as Aspirin may be given to people who have suffered a TIA by doctors in order to reduce their chances of having a full stroke in the future. Do not administer any medication in the first aid environment until the person has been assessed by a medical professional.

If you suspect someone is displaying symptoms of a stroke then you should seek emergency medical help as soon as possible. Never wait to see if symptoms will resolve by themselves. A TIA may appear the same as a full stroke in the initial stages.

The FAST test is a useful way for first aiders and first responders to recognise the signs of a stroke.