What is the difference between croup and epiglottitis? 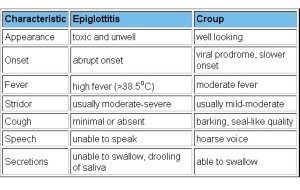 Croup is an acute inflammation of the larynx and upper part of the trachea and is otherwise known as acute laryngotracheitis.

Croup is a viral illness. It affects children between the ages of two months and nine years with a peak at 18 months. The onset is usually preceded by two to three days of ‘cold’ symptoms. It can be an alarming condition, often worse at night

Epiglottitis is a serious inflammation of the epiglottis.

Epiglottitis is uncommon. It is caused by a bacterial infection. The peak incidence is at two to three years of age. It leads to severe airway obstruction and there is a high risk of death.

When epiglottitis is suspected, the child must be admitted to hospital as quickly as possible. Any examination of the throat is dangerous as it can precipitate airway obstruction.